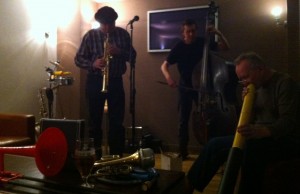 The ART Pack descended on/into a posh Italian cellar to bring the arts of noise to Clerkenwell. In the mix was the howling poetry of Grassy Noel, with Graham MacKeachan plucking surprises from his double bass while Mike Walter harassed a minute drum kit or cranked up his tenor sax. Paul Shearsmith pierced the tumult with pocket trumpet and the clang of fire extinguishers long past their quell-by date. New, even topical, writings were unveiled by trombone poetry, such as Critique of Pure Verbiage, a disentangling of art theory. A couple of outbreaks of tuneful folk music were furnished by ruM.

At The Queen Zed, singers sang to ice-bucket percussion, while punters sipped Sansom’s beer under an eleven-foot missile dangling from the ceiling. In between pints, one of the regulars nipped up and down a stepladder in front of the entrance doors, to poke at the fire alarm, adding a circus edge to the evening. Adding vexed barking every time there was applause, was a small but feisty dog, who patrolled the pub until retiring upstairs to bed at about 9:00. Trombone poetry offered a new foundling poem, Probably Not, and a piece called I Remember Doing Jazz Gigs Down The Road In The Plough Back In The Old Days. Later on, a man with a poodle arrived, just in time for a spoken word diatribe against Government policy that was momentarily accompanied by another open-miker absent-mindedly tooting a mouth organ. Twenty minutes later, a man with a dachshund arrived, as a singer lurched into karaoke mode. At first, peering at the stage, the hound stuck his nose up. When he spotted the poodle, though, he decided to help the song along. Fun for all the family, at The Dog & Stepladder.

The Jerico Orchestra projected its improvisations at projected slides for the denizens of The George Tavern. An over-refreshed bar-fly, slightly less articulate and sociable than that dachshund, grumbled at the candle-lit trombone poetry offering, to no avail. Fun for all the family, at The Drunk & Slide Projector.

The teasingly-named Keen/Osgerby Trio lured trombone poetry to Leytonstone for a joint gig at Luna Lounge. This is a band well worth seeking out, even beyond Leytonstone cellars. The Lounge is worth a visit too, one wall being covered with LP sleeves, from Scott Joplin to Donna Summer, which may not be unusual, apart from the fact that they still contain the records. Whether this applies to the ones peeling from the ceiling is unknown, but a vinyl frisbee beheading could deter punters. Fun for all the family, at The Duck & Guillotine.

A SPOONFUL OF POISON

This entry was posted in Chronicle and tagged Brixton, Clerkenwell, folk, foundling, jazz, Leytonstone, ruM. Bookmark the permalink.
Logging In...