The nautical brick-a-brack of The Montague Arms rattled to a broadside of improvised brasswork. Poems of bafflement and adventure were set adrift. We can only assume that a proper Monty knees-up was had by all as the evening rolled on, as trombone poetry provided the overture but then had to vanish into the New Cross night.

Though the trombone has had many a shout in the club downstairs, Jazz Verse Jukebox lured it upstairs at Ronnie Scott’s for a jazz/poetry outburst hosted by Jumoké Fashola. Polarbear, who is not Polar Bear nor even slightly ursine, flatcapped a couple of yarns, and the beguiling Zena Edwards shone again, with impromptu trombone beckoned aboard. A young poet’s balloon of earnestness was punctured, for this observer, by a sudden chin-jutting grimace that conjured up Albert Steptoe. A very familiar jazz poet bounded onstage and showed his improvisational prowess by weaving into his first poem the spontaneous line, “I’m losing my pants”.

An altogether more hushed and reverent affair blossomed in another upstairs chamber the following night: The Prince of Greenwich hosted Talking Rhythm. There were Spanish songs, odes to tea, and archaic versifying before David Studdert strummed to the coda.

Ineptly absent from last month’s schedule was another instance of Freedom Of Expression at The Green Dragon in Croydon. The Blowpipes pounded a Perez Prado mambo into the bar below, and played an arrangement of a trombone poetry number, Slippery Jack, that was also performed beforehand by that brave and song-free guitarist, Tom Janssen, whose new album is almost upon us. 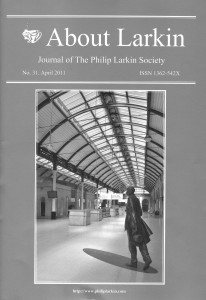 Also emergent: a newly edited video on the site from the Collision Festival performance. The poem about Larkin and me from last year’s festival in Hull is now in the latest edition of About Larkin, the journal of the Larkin Society.

The trombone poetry debut at the Brockley Max Festival was on a necessarily rainy bank holiday at The Talbot. Brand new nonsense verse was recited through a ruptured pub quiz microphone to bewildered regulars, and the Talbot Tango was invented for the occasion. Onwards and outwards!