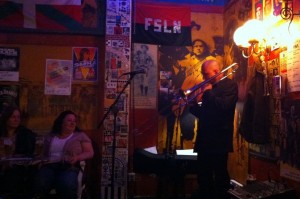 For the first time, trombone poetry was taken to Ireland, to see if Ireland would take to trombone poetry. The venue was Sandinos Bar in Derry, during the Derry Jazz Festival. The event was invaded by a babbleof Van Morrison fans halfway through, but was otherwise well worth crossing the Irish Sea. There are mutterings of another go at it. 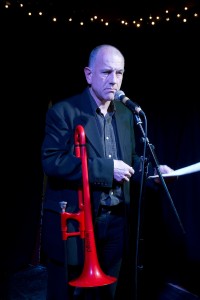 Someone spoke?[photo by Ant Smith]

There were more mutterings, if not splutterings, at A Spoonful Of Poison, in The Stag’s Head, Hoxton. Compulsive Spoonite, Jude Cowan, was accompanied by live sign-writing on scraps of cardboard. Ant Smithjolted the room with another sinister set.

At Freedom of Expression, trombone poetry regaled The Green Dragon with lines from trains and tunes off the rails.

The month was rounded off in a square, as lunch-time thrill-seekers heard whispers of wind-borne poetry at the Fitzroy Square Street Festival, punctuated by echoing trombone. George Chisholm versus Georgian architecture.

This entry was posted in Chronicle and tagged Croydon, Derry, festival, Fitzrovia, Hoxton, pBone. Bookmark the permalink.
Logging In...