Putting an elephant on a ship was our way of celebrating National Poetry Day. Local arts group NEON lured people to The Ship to share poems written en route to Elephant & Castle. Newly developed writing methods such as the lifecycle, itineRant and snews were not heavily overused.

The Stag’s Head was threatened once again with A Spoonful of Poison. That fine Hoxton boozer was the scene for a brilliant set by Jérôme Poirier, with many a turn ushered and shouted on and off stage by Vis the Spoon. 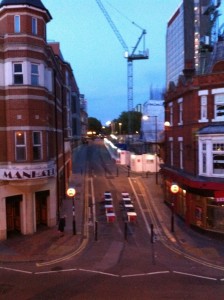 Furtive folk combo ruM popped up again at Freedom of Expression in Croydon, whereby this trombone crossed chords with the melodeon of Mike Walter. Also on the bill was the melodious Tom Janssen, with a set of original guitar instrumentals from his refreshing new album, Teabag.

Recent poems Fundamentally Speaking and Oversight were dished out at Indo Bar, where trombone poetry joined forces with Terry Edwards’ Near Jazz Experience for more pizza and pandemonium.

Down South again, trombone poetry was the guest on Tim Eveleigh’s show for Croydon Radio, with live improvised music and a pile of poems from way back when. This was partly a warm-up for another visit to Freedom of Expression at The Green Dragon, where punters were regaled with a new poem, Summit, distilled from a dictionary of mathematics.

Mirrors of Hall is a new London-based big band formed by composer Andy Hall. The band is dedicated to exploring new relationships between written and improvised music. This is the debut gig.