Snowboy & The Latin Section made a triumphant return to The Jazz Cafe, which is only the beginning of a resurgence of the band. This autumn sees a UK tour: details to follow next month.

Aldevis Tibaldi’s London Jazz Ensemble played a great set at Twickenham Jazz Club, but he is still coy about the tour of Italy.

An event that missed this trombonicle, due to scheduling snags, was a sensational concert at Cadogan Hall, where The Blue Planet Orchestra and The Hertfordshire Chorus performed Roland Perrin’s magnificent Lansky: The Mob’s Money Man, with a stunning performance from solo singer Rachel Sutton.

This is the final gig at this club, which will be demolished this summer. The band’s 13-year residency is coming to an end, but we will be starting a new residency on August 7th at Sundridge Park WMC.

Roberto Pla and his Latin Ensemble

THE MAYOR OF NEWHAM’S SHOW 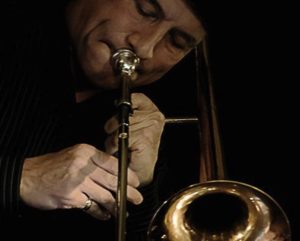 This entry was posted in Trombonicle and tagged Hull, jazz, Soho. Bookmark the permalink.
Logging In...