We began March’s adventures on radio, with an interview and performance on Sound Out on Resonance FM. This turned out to be not one item among many: the whole show was about trombone poetry, and a relaxed and welcoming event it was, too. Thanks to Carole Finer for the invitation. 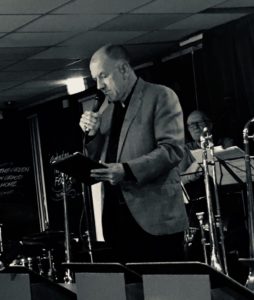 Mick Collins Legacy Jazz Orchestra added a few outbursts of trombone poetry to the programme at Sundridge Park Working Mens Club and Institute. The band played African Market, Sweet Georgia Upside Down, That’s Where It Is and a rattle-bag of big-band classics, while trombone poetry offered Adverse, Addages and Blues Talk, among other amusements. The option to buy club membership so as to use the members’ bar was not universally taken up

The month rumbled on with an event in Cafe Deli Felice, where Alison Clayburn hosted a ringtone-plagued instalment of Rotherhithe Voices, this time on the theme of resistance.

March ended with a bang at The Oval Tavern, where The Blowpipes were invited to play to a full house of boisterous Croydonians. The recital featured Ory’s Creole Trombone, Peckham Roy, Perez Prado’s Patricia, The Rusland March (to which someone marched up and down in front of us) and Leader of the Pack. Some noisy video will eventually emerge from this happy event, and we dearly hope to go back for more.

This entry was posted in Trombonicle. Bookmark the permalink.
Logging In...