In May came a rare outbreak of trombone poetry in Lancashire, at the Ribble Valley Jazz Festival in Clitheroe. The theme was Music in Poetry: Poetry in Music, and trombone poetry enjoyed the company of sundry local poets: Phil Burton, Stef Portersmith, Maureen Fenton, Iris Howden, Steve Tucker, Jenni Palmer, Andrew Collinson, and Alison McNulty. The same could not be said for the room-clearing comedy group. 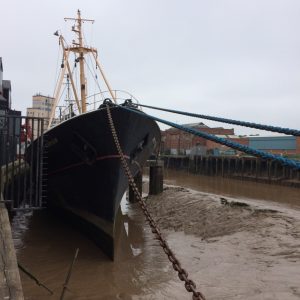 The Ropetackle Arts Centre in Shoreham-by-Sea had to cope with the 50th Anniversary of Harry Strutters Hot Rhythm Orchestra, a spectacle not for the faint-hearted. Incidents included Jim Hunt’s No Fishing routine and bandleader Maurice Dennis singing.

The Orchestra returned to Hull Truck Theatre to another packed house for Swinging At The Cotton Club, which in turn meant more plotting could be done in The Blue Bell and The Minerva with Dave Ellis and John Robinson for the next performances of Other Ranks in the autumn. Watch this space.

This entry was posted in Trombonicle and tagged Bromley, Camden, Hull, jazz. Bookmark the permalink.
Logging In...