A new poem, In Two Minds, was tried out on listeners at our favourite East End haunt, Indo, in Whitechapel. This poem, scribbled impromptu the week before at Deli Felice for Rotherhithe Voices, is about inner conflict, the divided self, and beer. The dedicatory poem, Indode, was again recited, in a long-term plan to get them to paste it on the ceiling. There was also Hanky Panky.

The Near Jazz Experience rattled the rafters and snifters, accommodating a trombone again along the way. 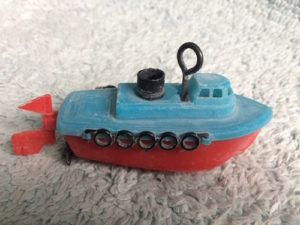 Diners were spared the poetry, but not the trombone, in an excellent Portuguese restaurant, O Picado, over in Westcliff-on-Sea. Chris Kibble presided on piano and tried to get a fork in at the lavish seafood spread they laid on afterwards. Among the standards were a few Click Beetle tunes: Blues at Sea, Float and South of the River.

We have learned of the very sad demise of Jazzman John Clarke, South London’s indefatigable beat poet. John has been mentioned countless times in these chronicles, and inadvertently kick-started the very first one, a report on a rum night out in Deptford (one of many) which discreetly omits his name. John was always supportive and helpful to trombone poetry and it will always feel strange not to bump into him again at future down-to-earth and up-in-the-air poetry events.

On Friday, trombone poetry will follow in his footsteps onto the Book Barge, a venue as yet unseen, but which is probably something  like the vessel shown above (Fig. 1). Welcome aboard!

JAZZ AND POETRY ON THE WATER

Bring oilskins and a bottle.

PARTY IN THE PARK

This entry was posted in Trombonicle and tagged Deptford, jazz, Kings Cross. Bookmark the permalink.
Logging In...