No poetry readings at the moment, though a fair amount of scribbling and coding has been going on behind the scenes for the forthcoming book, Better Late Than Sorry.

Meanwhile, a couple of poems have been unexpectedly fraternizing  with that splendid guitarist, Tobie Carpenter, who has asked about including them on his next album. Catch him at Hampstead Jazz Club on the 13th.

In March, Click Beetle continues its subterranean odyssey through the tune stockpile (which has just reached 150) at the fortnightly residency near Waterloo Station. Punters are offered a free programme at every gig, though they will be expected to draw some kind of beetle. Pencils provided. 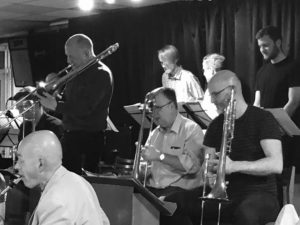 The monthly residency of the Mick Collins Legacy Jazz Orchestra continues in a superb working men’s club in the northern end of Bromley, with a fresh selection of big-band numbers every month. Treat yourself.

At the end of March, Harry Strutters lumbers into action again, after a period of convalescence / sequestration / re-upholstering / fumigation or whatever it was.

This entry was posted in Trombonicle and tagged Bromley, Dalston, jazz. Bookmark the permalink.
Logging In...