Another Whitechapel pizza was long overdue, so Terry Edwards’ invitation to a stint at the Indo in the company of The Near Jazz Experience was impossible to resist. As if that’s the only reason.

A batch of new poems was served up to the Napoletana-munching multitude, including Light Work, Oblonging and This Means Wardrobes, interspersed with spontaneous Indo-inspired hooting. 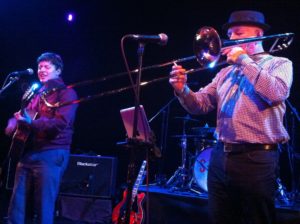 A couple of unexpected gigs came up with songster and rising star, D B Cohen, who normally includes this trombone in his band but opted for an experimental duo format for two nights with The Songbook Collective in London and Brighton. Catch the band itself later this week.

D B Cohen + other bands

This entry was posted in Trombonicle and tagged Brighton, Whitechapel. Bookmark the permalink.
Logging In...