The Mick Collins Modern Jazz Orchestra is doing a fine job of banishing winter woes at its monthly residency in Bromley (see below). Unfamiliar compositions by British writers are being revisited each month, together with classic US numbers. There may be an outbreak of trombone poetry too in a month or so.

In Stoke Newington, trombone poetry was invited back to The Others for an evening of Properganda, a mixed bag cabaret interspersed with clips from that legendary film, Freaks, an interesting context for some of the turns. This trombone was easily enticed back onstage by the final act, Nigel Burch & The Flea Pit Orchestra, to sit in on Mack the Knife.

It’s always a pleasure to have a local gig, so a two-minute walk to Deli Felice in Albion Street, Rotherhithe, was hard to resist, despite the words “open mic”. Alison Clayburn convened an evening of stories and poetry for the SEE16 Arts Festival, and will be running further events there.

There was also a gig for Click Beetle, confirmed too late for the last trombonicle, at the SEE16 Arts Festival. Half an hour of original music was hooted out to a crowd at The Gregorian pub in Jamaica Road, Bermondsey. We hope to return. 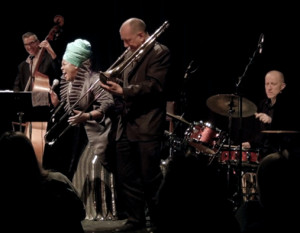 Jumoké Fashola wanted a burst of blues trombone to erupt into her brilliant Dirty Little Secrets show at St. James Theatre. A poem was tweeted:

amorous clamour
Jumoké’s joys
exquisitely shouted
indelicate choruses
blues in the heart
in the art of the blues.