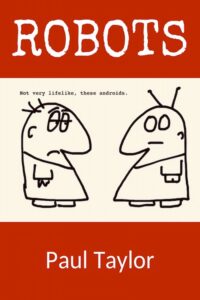 Robots is a collection of poems inspired by recent news stories from the world of robotics. Enthusiastic online articles sparked thirty poems contemplating the meaning of robots, exploring psychological implications or just getting the wrong end of the stick.

Each poem has a link to the online article that inspired it, and each article is the context for the poem. These short articles offer glimpses into the astonishing work that is being done in robotics around this planet and a few others. The poems suggest alternative takes on all this ingenious research and development. The links can also serve as reminders, later on, as they will display the titles of the original articles. Hence the poem titles are even more loaded than usual.

As robotics news continues to pour in, a second edition has been produced, raising the number of poems from 30 to 60.

It may be that another edition will be produced one day, but the numbers are in arithmetic progression, not geometric.

Robots is an e-book published by Redriff Press and is available from Amazon.