On a stage under the wing of a giant heron mural, the Dead Space Festival filled a void in a street off Brick Lane with bands and bards. New poems such as Uncertain Underground and Contrary Motion were offered up, plus some kind of Brick Lane Tango. Sadly, this great little festival was apparently snuffed out an hour later, due to belligerent locals who preferred dead space.

Brief sub-cultural aside: in a life happily ungoverned by fashion, it was entertaining to learn that one of the performers had deliberately left the price tag dangling from her cardigan, as a fashion gesture. Though this may still be absent-mindedness in some other sense, it is of course hardly as comical as the old half-mast jeans routine, despite the hint of Spike Milligan. 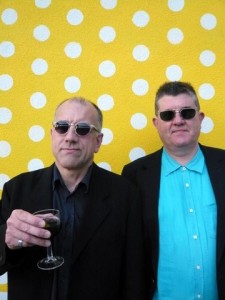 At the Beautiful Days Festival in Devon, ruM began a recital, on the attractively-named Dirty Davey Stage, to passing punters and a village of tents. Once again, Nobby Hall rubbed shoulders with Albert Ayler, and thousands of adoring music-lovers abandoned the main stage en masse, to dance, cheer and swoon at our feet.

By the time trombone poetry appeared on stage later on, the vast crowd had been herded away again by a man with a sheep dog and a pointed stick.

Clapham Common Bandstand: London’s top Latin bands, La Clave and Roberto Pla’s Latin Ensemble play a set each on a glorious Sunday afternoon. But that was then, the early 1990s. In 2010, The Blowpipes Trombone Trio play two sets, for the same individual fees. Go figure.

At The Queen’s Head, a gem of a boozer near Kings Cross, trombone poetry was the guest of the Horseless Headmen, Grahame Painting’s new quartet with Roland Bates, Nick Cash and Ivor Kallin. After the band’s intricately improvised first set, the audience suddenly vanished (even before the trombone was visible, thanks) leaving only a seemingly keen couple to listen to the trombone poetry set, who then played chess instead, with the bloke commentating on it like a barking seal. When the barman had a gentle word, they too promptly left, leaving behind them an abandoned game and the whiff of kippers.

Poetry night at Hermitage, on the Thames. Poets perform work about history, memory, and rivers.