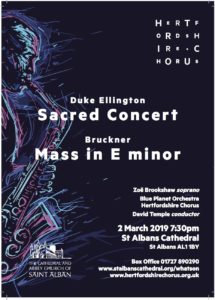 Playing a short set at Deli Felice for Rotherhithe Voices was a great start to the year for trombone poetry, with the first recital of the rambling rant, I Make a Documentary. There is talk of making a film out of that poem, sometime this year.

Aside from that, the sounds of early Ellington have been hooted up and down the country, in the fidgety hands of Harry Strutters, who, after the highlights of Oldham and Southend last month, will be slumming it in Sloane Square.

There will be a few Latin Jazz explosions, courtesy (if that’s the right word)(it isn’t) of Snowboy & The Latin Section and the brilliant Jen Kearney, but the return to Ronnie Scott’s seems to have sold out before I could get round to writing this Trombonicle. You may be able to force your way in with some kind of home-made Vice Squad ID card, but at your own risk.

On a more devout note, despite the involvement of this trombone, more Ellington will be enjoyed at the beginning of March, along with some mass howling. Roland Perrin is once again sharing his outstanding arrangements of our hero’s music: not to be missed.