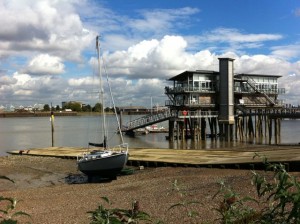 At the end of April, a dash of trombone poetry was added to the jazz standards at Greenwich Yacht Club, in cahoots with impressive young vocalist Heather Andrews, with the Thames splashing beneath us. A great setting for a gig, and a perfect occasion for a fleet of marinet poems.

In May, trombone poetry returned to Talking Rhythm, a poetry/music night at The Amersham Arms in New Cross, hosted by the irrepressible John Clarke. New poems were let off the leash, including Figures of Eight, a meditation on creationism written in a barber’s, and an improvised waltz was offered as an encore. Highlights of the evening were an unexpected recital from Ronnie McGrath and an assured spoken word performance from Sara Shah.

Charlotte Glasson kindly made room again for some poetry, as well as the invited trombone, at her band’s gig for Birmingham Jazz at The Red Lion in Hockley.  Our joint efforts, with Sam Glasson, Chris Spedding and Dave Holdsworth, were treated to a review on The Jazz Breakfast.

Meanwhile, the web-site has been re-vamped, and there has been the odd tweet too.