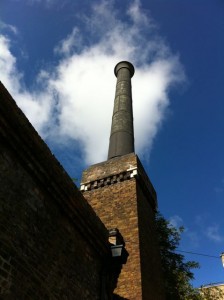 An impromptu trombone poetry set was unleashed at the Brunel Museum in glorious Rotherhithe. This necessarily involved a small flotilla of marinet poems written in the nearby Angel pub, plus a couple of underground poems for Brunel.

After years of performing in jazz venues, art galleries, pubs, libraries, theatres, tents and cellars, trombone poetry has finally invaded the realm of folk music. What could be a more symbolic debut than a gig at Cecil Sharp House? Sarah Collins’ arrangement of She’s Like The Swallow was played, along with Slippery Jack.

In residence was Burton Bradstock and his band, who played an outstanding set of brilliantly arranged folk songs. Those who can’t book a place at the trombone poetry gig on October 30th can cheer themselves up by attending Bradstock’s album launch instead, at the Pizza Express in Dean Street, though the beer won’t be nearly as good.